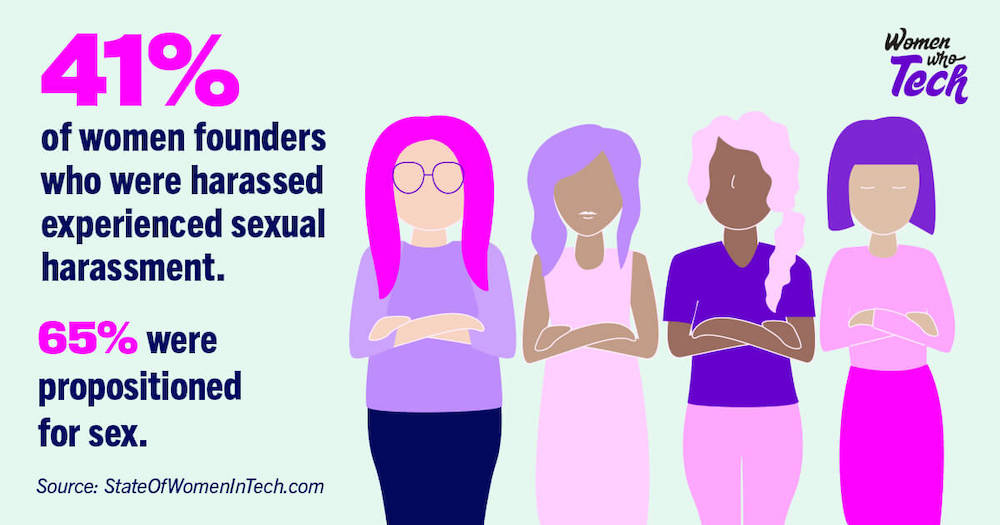 The Tech Sector’s Culture of Sexual Harassment: An Enduring Issue

One would think that the fight against sexual harassment in the workplace could only have gained strength over the past few years, yet one glance at Silicon Valley will remind you that we’re barely moving forward at all. A recent 2020 study by Women Who Tech indicates that over 41% of women founders or employees in the tech industry experienced some level of harassment – a statistic that has hardly nudged since the peak of the #MeToo movement in 2017.

So here we are –  several years after the hashtag that publicized sexual violence and toxic work environments across some of the biggest companies in the world, yet the tech industry continues to have a shockingly disastrous track record of keeping harassment and retaliation in check.

Statistics on Workplace Harassment in the Tech Industry

The demoralizing 2020 statistics on harassment in the tech industry indicate that women continue to bear the brunt of unfair treatment in the tech world, whether sexual in nature or not. According to Women Who Tech’s most recent survey, 75% of female tech founders or employees said they were told offensive jokes, 54% experienced unwanted physical contact, 51% had sexual slurs directed at them, and 35% were propositioned for sex (a number which has actually increased 5% since 2017).

The issue is not only rooted in systemic sexism but also in systemic racism and discrimination against sexual minorities. In particular, women of color (47%) and members of the LGBTQ community (65%) reported experiencing persistent harassment in the tech industry. There are harrowing stories of women being blackmailed over their immigration status or being forcibly kissed during a pitch meeting at a coffeeshop.

Of course, men can also be (and are) sexually harassed in the workplace, but statistically speaking the numbers continue to be lopsided, with 48% of women working in tech experiencing harassment compared to only 11% of men.

Types of Sexual Harassment in the Tech World

From a legal standpoint, sexual harassment in the tech industry will generally fall into one of two categories (as in any other industry) in California:

“Quid Pro Quo” (Latin for “this for that”) sexual harassment typically involves a person in power explicitly or implicitly offering something, such as a promotion, a raise, a good performance review, or an investment opportunity, in return for a sexual favor. Conversely, it can also involve retaliation for turning down a sexual advance or refusing to participate in a sexual act.

In the tech world, this is particularly common in the context of seeking investment opportunities. In fact, 40% of women tech founders said they have experienced some form of harassment by an investor. Of those women, 59% were explicitly propositioned for sex in exchange for investment funding.

Moreover, it’s important to note that sexual harassment doesn’t necessarily have to be of a sexual nature (although there is often some crossover); it can involve offensive remarks about a person’s sex, sexual orientation, or gender identity, derogatory comments about women in general, dirty jokes, teasing, exclusion, or any type of differential treatment based on gender. If severe or frequent enough, this is what’s legally considered a hostile work environment and could be grounds for a workplace harassment lawsuit. In the tech industry, women in particular have to deal with this type of behavior all the time.

Nearly 50% of the women tech founders surveyed last year said that they were explicitly told by male investors that they would raise more money if they were a man, or if they had a cofounder who was a man. One young woman was told that she was “at the right age because it’s hard to invest in women after they turn 28.” Another female startup founder was told that she would have received funding if “she had a beard.”

This type of differential treatment is rampant in the tech industry, with 70% of women admitting to being treated differently due to their gender (compared to only 11% of men). It’s not just coming from investors in high level meetings, either; female employees and other minorities in any position within their company have to deal with hostility from a variety of angles, and the issue is not getting any better. Of the women surveyed, 76% said that they had been perpetually harassed by a fellow employee (a 13% increase since 2017), and 42% said that it was by a supervisor.

A Lack of Diversity

In order to make sense of the many factors that contribute to harassment in the tech industry, one has to first step back and look at its power structure as a whole – and how it got there. It’s no secret that the tech sector is primarily dominated by White men – so how much of that should be attributed to merit and how much of it may be the result of an internal bias within the industry?

When 55% of women have reported receiving differential treatment while raising funding – specifically because of their gender – and 46% of women of color claimed they were harassed by a potential investor, one could argue that Silicon Valley’s diversity problem stems from a self-perpetuating system. There seems to be a pattern in which venture capitalists have gotten into the habit of disproportionately funding companies founded by people in their own demographic – namely male and Caucasian. The shockingly low amount of VC funding that has recently gone to female tech founders and minorities certainly points in that direction.

A Problem of Accountability in the Tech World

The lack of diversity in tech’s corporate landscape often leads to a lack of accountability when it comes to sexual harassment and unlawful behavior. When victims of harassment such as women or minorities are underrepresented all throughout the corporate ladder, illegal transgressions against them will be more readily perpetuated, downplayed, or swept under the rug.

One huge issue is that HR departments in many of these big tech companies are set up to protect the company from liability, not their employees. In fact, 67% of women who work in tech have said that they don’t trust how their company would handle allegations of harassment. Of the women who did report the harassment to HR, 85% said the harasser faced no repercussions, and 45% said they themselves were punished in some way for reporting it.

This creates an environment in which employees feel like they have nowhere to turn – or worse – in which they prefer to remain silent due to fear of retaliation. Since 2017, statistics show that women in tech companies aren’t reporting harassment to senior management nearly as much as they used to.

For all the publicity, awareness, accountability, policy reform, and diversity pledges from major tech companies instigated by the #MeToo movement, it seems perplexing that harassment in the industry is just as widespread as it was before – and in some cases even more so. Ironically, one could argue that some of the publicized mea culpas and new diversity policies enacted by major tech companies – while undeniably positive – have been partially utilized as a red herring for actual reform, and have in some ways diluted the real struggle for equity.

As workplace harassment lawyers, we certainly won’t be able to rebuild Silicon Valley’s entire power structure, but we can at least chip away at it from the bottom. If you’re a tech employee or founder who has been a victim of harassment, seeking justice against your perpetrator is your legal right. Not only that, but it brings us one step closer to setting a moral precedent that the tech industry has a history of ignoring.

No one can deny that society as a whole has come a long way in terms of how we view sexism in the workplace.

The demoralizing 2020 statistics on harassment in the tech industry indicate that women continue to bear the brunt of unfair...

Quick look of California's new labor laws in effect for 2021.